So this is what it’s come to:

Sun Microsystems, shame on you! You guys know OpenOffice.org is already free, right? 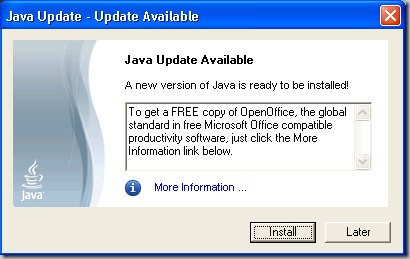 Surely there’s a better way to get people into the OpenOffice fold than this kind of…cheap trickery?

Looks like Google‘s now offering Sun‘s payware (normally $70) office suite StarOffice for free, via Google Pack. Google Pack, if you weren’t already aware, is a service/site of Google’s that offers some software titles for free (some of them Google properties like Picasa), so take a look if you haven’t already.

It initially seems kind of weird that Google didn’t go for the already-free OpenOffice.org, but Google and Sun have a relationship…so it’s really not that weird.

StarOffice 8 contains a word processor, a spreadsheet tool, applications for presentations, databases, math formulas and drawing. It has support for most Microsoft Office formats (except for the Office 2007 formats). It can also export documents to PDF out of the box.

StarOffice has a pretty large installer (just over 140MB), so it’s best if you have a fast Internet connection or some bandwidth and time to burn.

If you’re interested at all in comparing office suites, it probably won’t hurt you to check out the free OpenOffice.org, too. The Windows installer for current version 2.2.1 is around 93MB (Mac OS X, 135MB and Linux, 120MB). I’ve been using it off and on for years, and more recently, I’ve been using a portable version of it that runs off a USB thumb drive, helping me to be more productive anywhere, anytime.

No matter which free suite you choose, it’s good stuff, and the price is certainly right.