We really appreciate you visiting our site! Keep up with us here by subscribing to our RSS feed. We hope to see you again soon!

Midnight on a Sunday night isn’t necessarily the “busy time” for online banking for most people, but for us, it’s often the time we have available for updating accounts, paying bills, updating Quicken, etc.

The all-too-frequent problem we run into is this, and not just on Sunday nights: 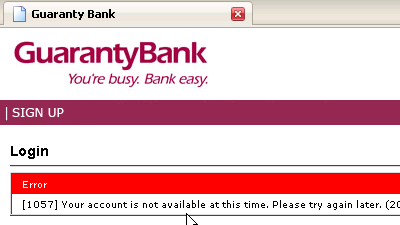 We’ve called GuarantyBank about this before, and were told that this isn’t something they do, there isn’t any such issue, and they aren’t doing maintenance or backups or anything. And yet it’s usually like this for a couple of hours at a time…every time.

So say you, GuarantyBank, but…

We can’t access our accounts in any fashion at all. We can’t get in to check and pay bills. Any online banking or financials stuff we need to do, just ain’t happenin’ tonight.

Guaranty Bank, shame on you.

You’ll notice GuarantyBank’s tagline in the first image above: “You’re busy. Bank easy.” Yes, we are. And no, we can’t.

Maybe we need a new bank.

Update: After working on a few other things for about an hour and a half, checked the site again and it’s still giving the error. Thanks, GuarantyBank! 24/7 availability? Uh-huh.

Update: It started working again shortly after 2am. Since I don’t know how long it was down prior to my discovery around midnight, I can’t say how long the entire downtime was. However, “way too long” seems a very fair and reasonable estimate.

This site uses Akismet to reduce spam. Learn how your comment data is processed.